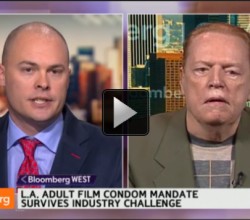 HUSTLER’s Larry Flynt appeared on Bloomberg TV to discuss the ongoing debate on legislated condom use in the pornography industry, including recent moves like Measure B in Los Angeles County and AB 1576 in the state of California. Mr. Flynt discussed the importance of appealing any decision that would require pornographic actors to use condoms while filming. […]